I just got back in from the third day of our Adventure session and let me tell you we had fun today, and boy was I busy!!! AdventureDavid, Dina, Corey, Hannah, Parker, Maxwell and I were joined by two new adventurers, Adventurers Ryan and Chris, who just returned from white water rafting the Green River in Utah. Talk about adventurers, I don’t think they know when to call it quits, my kind of guys, and great kids too!

Today was our weekly fishing day adventure and I had a full load! I knew I was going to be busy today trying to keep up with this crew. We started off heading to the “Deep Hole” by the sandbar to cast net some Menhaden to augment our bait supply of fresh squid. AdventureCorey and I threw the nets a few times and filled the live-well with a couple hundred and off we went to the artificial reef to drop anchor. 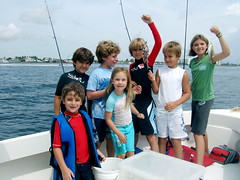 From the very first second I couldn’t bait hooks fast enough! Some wanted live bait and some wanted fresh squid and every one wanted to fish at once. Luckily I had 10 rods on the boat, 8 to use for bottom fishing and 2 to put out larger baits for Barracuda. We decided to fish them all at once, and amazingly enough I don’t remember having to untangle one line. Now that’s a fine group of adventurers! What I do remember is having to bait hooks faster than I have ever done in my life before. We had lots of nonstop action, but the fish were a little more difficult to hook today. Maybe they remembered from the last time we were here and were a bit more careful.

Adventurers Ryan, David, Corey and Hannah were quick to hook up and bring fish to the boat while Dinah, Parker, Maxwell and Chris spent a bit of time feeding those on the bottom. AdventureRyan caught a nice big Caesar’s Grunt while AdventureHannah was quick to boat a big Black Grouper! AdventureDavid boated a beautiful yellowtail snapper and AdventureCorey boated a large Lane Snapper! Now that’s fishing!!! It didn’t make a difference where you fished from the boat, everyone was having bites! It just was a lot harder to hook them today. The current was ripping out over the top of the reef and it was definitely harder keeping your bait on the bottom, and that can make all the difference in the world. 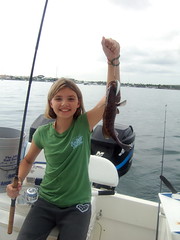 All of a sudden I heard AdventureDavid yell he had another big one on and I looked over to see his fishing rod bent double. A second later the line slackened and I watched as David reeled in a 6 inch long Butter Hamlet wrapped around a nice red sponge. Someone said he caught the ‘pants” off of Sponge Bob Square Pants and I almost fell out of the boat laughing. Of course, I had to take a picture of that! 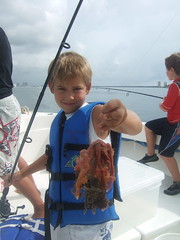 AdventureDina and Parker caught some nice Caesar’s Grunts while Ryan boated a big Porgy. AdventureHannah wasn’t saying too much but I watched her catch fish non-stop! I don’t think she wanted anybody else to notice how many fish she was catching and crowd her spot!
I always have to admire when the girls out fish the boys, kinda like AdventureAllison last week who caught fish non-stop and didn’t say a word either. Maybe there is an important lesson to be learned there. I wonder… 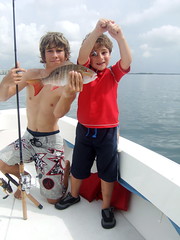 We caught all kinds of fish non stop but surprisingly enough the big barracudas didn’t show up. A little bit later Ryan caught a scorpionfish, a nice ugly bottom dwelling poisonous fish full of spines and loaded to the hilt with a very painful toxin. Yep, you guessed it, as a very inquisitive, (some would say careless) child, it didn’t take me long to find the business end of one of those either! And that left a lasting impression that I never wanted to repeat, ever again! From that moment on, I have been very careful taking these off the hook. Sometimes I think it’s best to cut the hook off and leave the fish well enough alone! At this point we decided to call it a day fishing and spend the last hour left snorkeling the Rock Garden or going back to swim in the Deep hole. Just as we were leaving I think AdventureDavid spotted a dead Loggerhead turtle floating on the surface and the current swept it right by the boat. When it came by, you could tell what caused its demise! Missing out of the right side was a large ragged circular bite, right thru both sides of the carapace, and only one very large toothy critter does that! I decided not to hum the tune of, ” When the shark bites” at that moment, but I thought about it. I just knew that my humming was no better than my singing or dancing and I didn’t want to embarrass myself… Stick to what I can do and avoid what I can’t do kind of thing!

Shortly after this we arrived at the Rock Garden and everyone spent a half hour snorkeling, catching fish and crabs in the nets and just having a blast! AdventureRyan found a nice Jawfish in his tunnel and we all checked it out then boarded the “Dream Chaser” and headed to the Deep Hole for a quick snorkel with the thousands Menhaden swimming here before having to call it a day. AdventureCorey took a few throws with the cast net and caught a bunch of menhaden and the terns and seagulls were quick to make a meal of a few. almost off our finger tips. It was great for us, maybe not so much for the menhaden though, but the terns and sea gulls loved it too!

From here we hurried back, each one of us with smiles on our faces, and looking forward to tomorrow! Not all of us actually boated fish today, but we had fun trying!!!! We knew there was always another day and another adventure to be lived and we were going to make the most of it!!!

One thought on “Fishing Near Peanut Island”