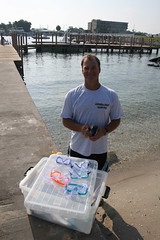 Mike Bacon grew up fishing and snorkeling in North Palm Beach, Florida. He began scuba diving in 1966 and has been a professional Underwater and Nature Photographer since 1987. He has spent tens of thousands of hours in, on, around and under the water.

His career as a freelance wildlife photographer has taken him worldwide. His award winning photographs have appeared in hundreds of underwater, nature and wildlife magazines including National Geographic, Natures Best, Nature Photographer, National and International Wildlife, Ranger Rick, Ocean Realm and Sea Frontiers.

You can see some of his photos on his photography web site, MikeBacon.com.

Mike earned his 50 ton captains license in 1987 while working for Mote Marine Laboratory in Sarasota, Florida.

He has had a life long passion for sharing his knowledge and expertise with others, including his students as a teacher in the fields of earth/space, marine and natural sciences. His enthusiasm and love for the ocean realm is contagious.