Welcome back! We just finished up the first day of another new adventure session and as usual, what a great day it was! Adventure David and Dina from last week had so much fun they decided to join me for this week too. Alright! I just love it when kids come back! After a weekly session of adventuring you almost feel like you’ve become family. We have that great a time! I’m going to miss them when they go back home to Hungary. Today the three of us were joined by 4 new adventurers, AdventureCorey, Hannah, Parker and Maxwell, and I can already tell its going to be another great group! 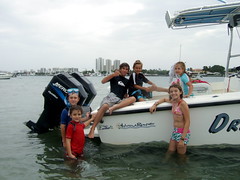 We left the dock and headed out to do the normal first day adventure going to the Rock Garden and checking out the hundreds of fish that call this place home. When I came around the bend I noticed the sandbar was already exposed and dead low tide wasn’t till around noon so I knew it was going to be an extreme low tide. When we arrived at the Rock Garden the water was only about 2 feet deep instead of the usual 4 to 5 foot range so we anchored out a bit further than normal got our snorkel stuff together and got in. The large schools of menhaden, parrotfish and sheepshead were still there. We all took little collection nets and spent the first hour catching blue crabs, hermit crabs, swimming crabs, arrowcrabs, rock crabs, brittle starfish, blennies and a variety of pistol and popping shrimp. I think each one of us caught something different. After a while, the water level got so low we could walk from place to place without getting deeper than our knees. I have never seen such a low tide here. It has to be an unusual planetary alignment or moon phase or both to cause this extreme low tide. We decided to go to the sandbar to check that out.

When we arrived, we were amazed by what we saw. The whole north side of the island was exposed for hundreds of yards. It was just so unusual to see this much area out of water. We could already see shells and starfish popping out of the sand. We hurriedly grabbed our nets, masks and a bucket and headed out to explore. By the time we got to the sandbar, AdventureCorey, David, Parker and Maxwell had nets full of crabs. 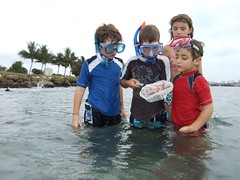 We found some really unusual box crabs, egg masses to moon snails and fighting conchs and lettered olives were popping from the sand by the hundreds. We discovered them in all sizes from tiny to gigunda. I had never seen this before. It was just fabulous and AdventureDina and Hannah had handfuls to observe and let slither around before letting go. We had to find at least a dozen beaded starfish that we let go in deeper water so the birds wouldn’t eat them and some very large baby’s ears snails that were coming out from the sand. We explored the whole area and found so much. It was great to search the exposed areas I had never seen out of water before and even the sea grasses were high and dry.

We came to a large swimming pool sized hole that was around 8 feet deep in the middle with a dry bank all around it and full of fish. We would take turns running off the bank and doing cannonballs to make the biggest splashes and see who could jump out the furthest. We had a ball. 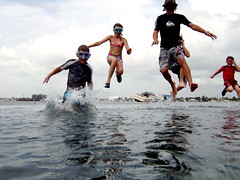 Before we knew it the day was over and we had to head back to the boat. On the walk back along the sandbar AdventureParker found a very large nine armed starfish crawling out from beneath the sand and showed us all. It was a nice find! We took some photos then he moved it to deeper water also so it wouldn’t dry out in the sun or get eaten by a bird. Just as we were coming to the end of the sandbar we spotted something crawling towards the water and ran to see it. It was a very large and beautiful Rooster Crab, one of the largest members of the box crab or shame-faced family of crabs. 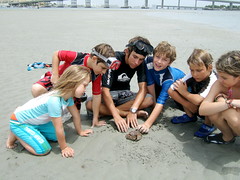 They get their name from the way they hold their claws folded in front as if they are “ashamed” to show their faces. The Rooster Crab gets its name from the raised edge of this folded claw that looks like cackles on a rooster. This is the only one I have ever seen here and a real beauty to find. We were lucky! It may be many years before I see another one like this, and especially one this large. Just great! Thank you…

From here we climbed back aboard the “Dream Chaser” and headed back. And on the way I was again asked, “why don’t I end the camp at 5pm instead of 1pm? We don’t want to go back yet!” and I mumbled something about how the weather gets worse around 3pm and didn’t want anyone out in lightning or thunderstorms, etc. but at that moment I don’t think they seemed to care. They were too busy having fun and its hard to quit while your still smiling! I know all about that, and it seemed like we just started. Oh well…

and there’s always tomorrow, and who knows what we may discover then, but one thing is certain, “We’re going to have Fun”!!! Stay tuned to see what we find… or better yet, come join us for your own adventure!!! Have a story to tell of your own and memories to share forever.

See you on the return,

One thought on “Pool Hopping Near Munyon Island”