Hi Everybody, Welcome back!!!

We’ve just finished up the second week of Fun and Adventure. Times two of course doing double sessions, and as usual, We had so much FUN!!! I was again blessed with two more perfect groups of kids, and absolutely perfect weather as well, and all this led up to another fabulous week of Fun and Adventure!!! We had FUN from sunrise to sunset for four days in a row!!!As soon as the first session was over, the second would arrive, and off we would go again! It just doesn’t get any better than that! FUN FUN FUN from start to finish!!! Just the way I love it! 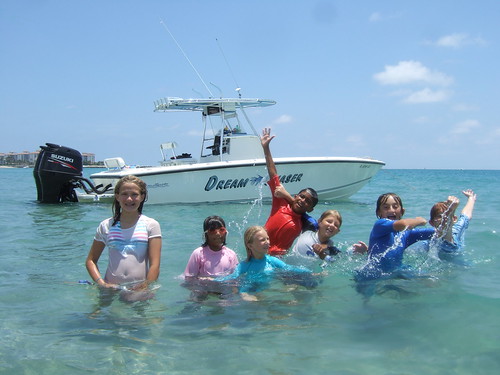 We spent a few hours everyday exploring the Rock Garden. There were fish everywhere and the water was crystal clear! We had so much fun observing and chasing fish, looking under rocks catching all sorts of different species of crabs, finding sea cucumbers, conchs and shrimp. You name it, we found it, and of course we tried to catch it just for FUN! Sometimes we were succesfull, sometimes we weren’t, but we had FUN trying none the less! It was just GREAT! One of the best moments occurred when an inquisitive porcupinefish swam right up to us as if to ask, “Are you AdventureMike?” And let me tell you, we loved that!!! 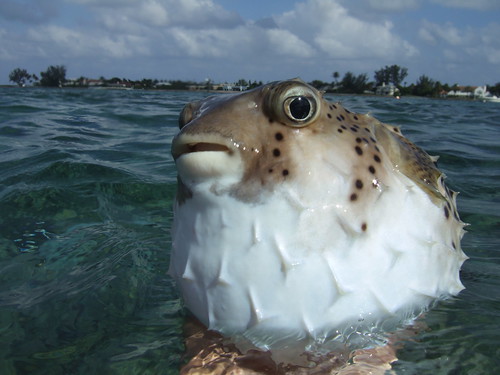 That beautiful porcupinefish swam all around us and we couldn’t help but take a few photos with our new found friend! We were careful not to get our hands or fingers close or near to her mouth as they can deliver a painful bite! They eat barnacles right off the rocks with no problem! We all took turns carefully holding her up close, watching her fill up with water to twice her size, and being very careful to not let our fingers get in the way! A few moments later we released her and watched as she lazily swam into a nearby hole in a rock, turned around one last time to take another peek at us, and then disappear. AdventureJake sure had FUN when it was his turn to hold her. We ALL did!!! 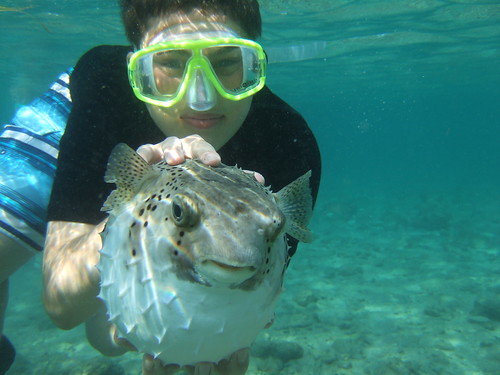 This week was the perfect one to check out the Big Sandbar! We had exceptionally low tides and each and every day we would stop by to search the bar for starfish, shells and anything else that was out and about. We found so many cool things!!! We found beaded starfish, cushion starfish and 9 armed starfish in a variety of sizes. During one morning romp we came upon the biggest 9 armed starfish I have ever seen! It was just crawling out of the sand into deeper water when we arrived. Lucky for us!!! A few minutes later and we would never have seen it. Adventure Hannah sure loved finding that one! 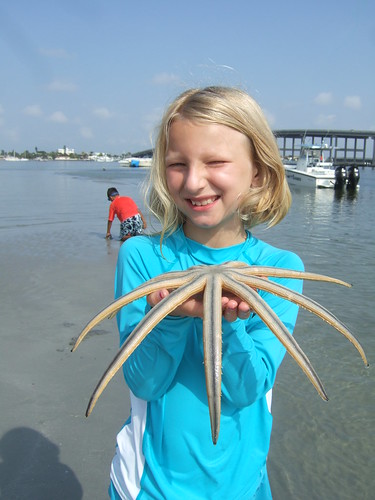 We all took turns checking it out and watching at how quickly it could right itself when turned upside down. This species of starfish is one of the fastest “movers” in this area, and has no trouble burrowing quickly into the sand and disappearing right before your very eyes! We always love finding these and wish I could find one every trip! Of course this gave those who wanted an opportunity to have their picture take with a 9 armed starfish hairdo! After all that was over and done with, we placed it in deeper water in the direction it was going and off we went to discover knew things. I think the photo I love best is of Adventure Trey having fun with his 9 armed starfish hairdo!!! 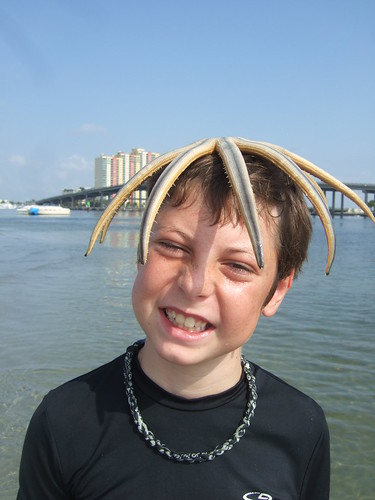 Another interesting thing we discovered while snorkeling along the shallows of the bar was a tiny blacktip shark about 8 inches long lying dead on the bottom. She appeared to be premature or still-born the night before. Blacktip sharks sometimes come near shore to give birth and unfortunately this juvenile didn’t make it. But it did give us a wonderful opportunity to check out a real shark up close and personal and we all were appreciative and thankful for that! On the way back to the boat we found dozens of Florida and West Indian fighting laying eggs. We collected a few to look at happily found some that came in beautiful colors! I always love finding those! 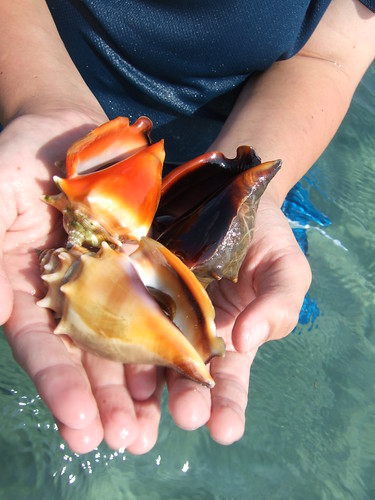 One of our very favorite days was Fishing Day!!! And of course as usual, this day was no different than all the other fishing days we’ve experienced so far! Non-stop action from start to finish!!! Sometimes you can’t count 3 seconds before having a fish on!!! Just the way I LOVE IT!!! This time we caught so many different species of fish that I could hardly keep track!!! The ‘toothiest one” was caught by Adventure Bradley who came up with a nice and impressive barracuda that had the most pearly white dentures you’ve ever seen!!! He gave a great fight and I was amazed that Bradley got that one in with no wire leader at all. When it started jumping out of the water and shaking its head I kept telling Bradley there is no way that fish is going to stay on with out cutting the line! Of course he had to prove me wrong!!! Nice Job Bradley!!! 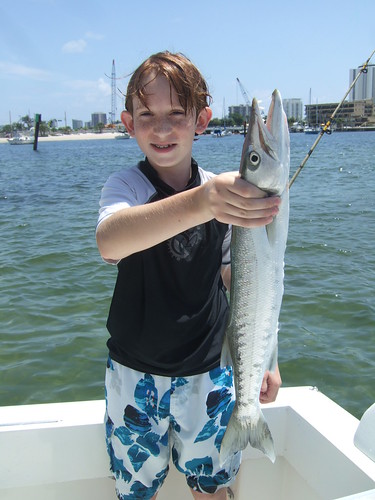 After catching numerous parrotfish, porkfish, grunts, tomtates, hogfish and a few small yellowtail snapper and one rather ugly scorpionfish, etc. I decided to take the kids to my secret snapper hole a bit further up the lake. This spot sometimes holds a rather impressive number of Big lane snapper, and on this day it was no different! As soon as the boat was anchored, the lines dropped down and the action began!!! Non stop snapper action from start to finish!!! I was so busy unhooking and releasing snapper I could hardly take a photo. The minute I stopped to take a picture, 7 more were on the lines!!! How GREAT is that!!! One of my favorites is of Adventure Jackie catching another big one!!! 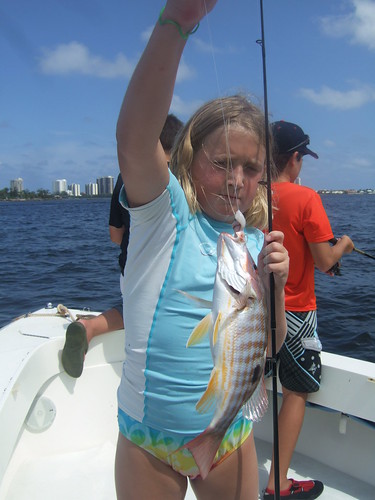 While we were here, AdventurePaul caught a lovely remora that gave a good fight. These are the fish commonly found attached to sharks, rays and sea turtles, etc. and hitch a free ride waiting for a meal. I let it “suck” onto his arm after it was unhooked just for the fun of it. You should have seen his smile! i loved that and he did too! Everybody caught big fish. Over and over and over!!! AdventureMichael caught a big porgy that gave him a good battle too. It took some time for him to get that one up to the boat on super light tackle. Nice job Michael!!! Everybody did Great and I was super proud! 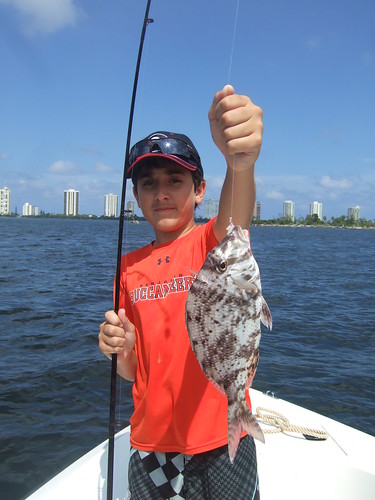 One afternoon during low tide we took an island hike to the back side of Big Munyon Island. The tide was as low as I’ve ever seen it! In one deep hole we watched snook, jacks and a big permit chase mullet into the air and almost on the beach! We watched Roseatte Spoonbills search for crabs and shrimp in the shallows and found the smallest horseshoe crabs I’ve ever seen!!! We loved every minute of that!, and when the mosquitos found us, we hurriedly hiked back to the boat and went to the Rock Garden for another quick dip and chase fish with our nets.We had so much Fun on that day too! From the very start to the very end! 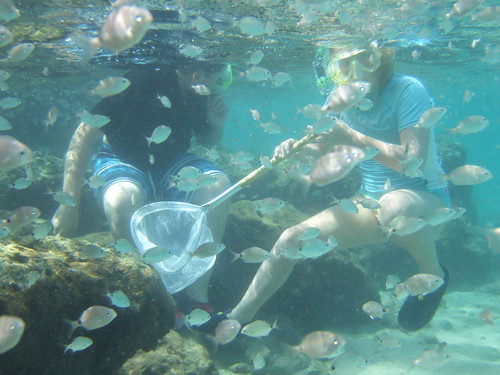 I think one of the most favorite fish we keep our eyes out for is the sharpnosed pufferfish. Even though they are small and rather slow swimmers as fish go, they are difficult to catch!!! They have a habit of darting quickly away, then turning on a dime and swimming rapidly between your feet and disappearing into the silt or under some rock, no where to be found! I can’t tell you how many we lost track of that day!, but we kept trying and were finally rewarded for our efforts! I think this picture of AdventureSara with a pufferfish sums up our enjoyment!!! It sure did mine! 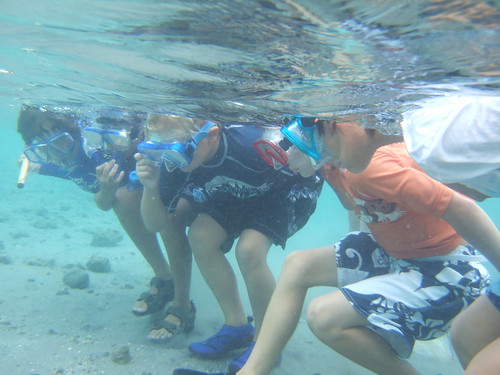 One day when the Ocean was flat calm, we took the Dreamchaser south out the inlet and anchored right on the beach to enjoy the day. We looked for sea glass and shells, and scooped up the sargassum seaweed in our handnets hoping to catch some small sargassum filefish, shrimp and crabs that camouflage perfectly with the seaweed itself. We found hundreds and before long had a 5 gallon bucket of “treasures” that was neat to look at! One of the neatest things we caught was a reef squid that propelled itself backwards around the bucket squirting out ink, and this was much to our enjoyment! I know AdventureMadison was thrilled with that! Me too of course! 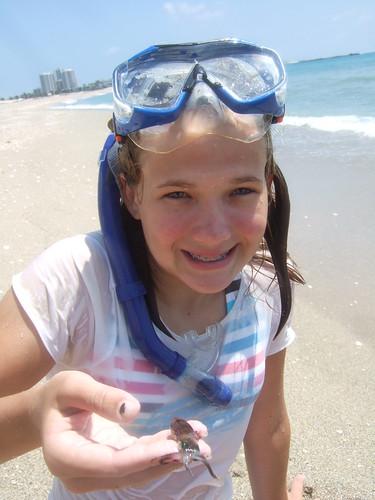 We spent a good portion of the last day back at the Rock Garden watching small barracudas and jacks chase menhaden and hundreds of parrotfish grazing algae off the rocks inches from our noses! We never wanted to leave as the water was crystal clear and fish by the hundreds were everywhere!!! We had a contest to see who could catch the biggest crabs and everybody came up with something nice! AdventureSeth, Rujul and Trusha caught one nice big one together and that was great to watch them in action! They looked like professional “Crab Catchers” to me. You guys rock!!! 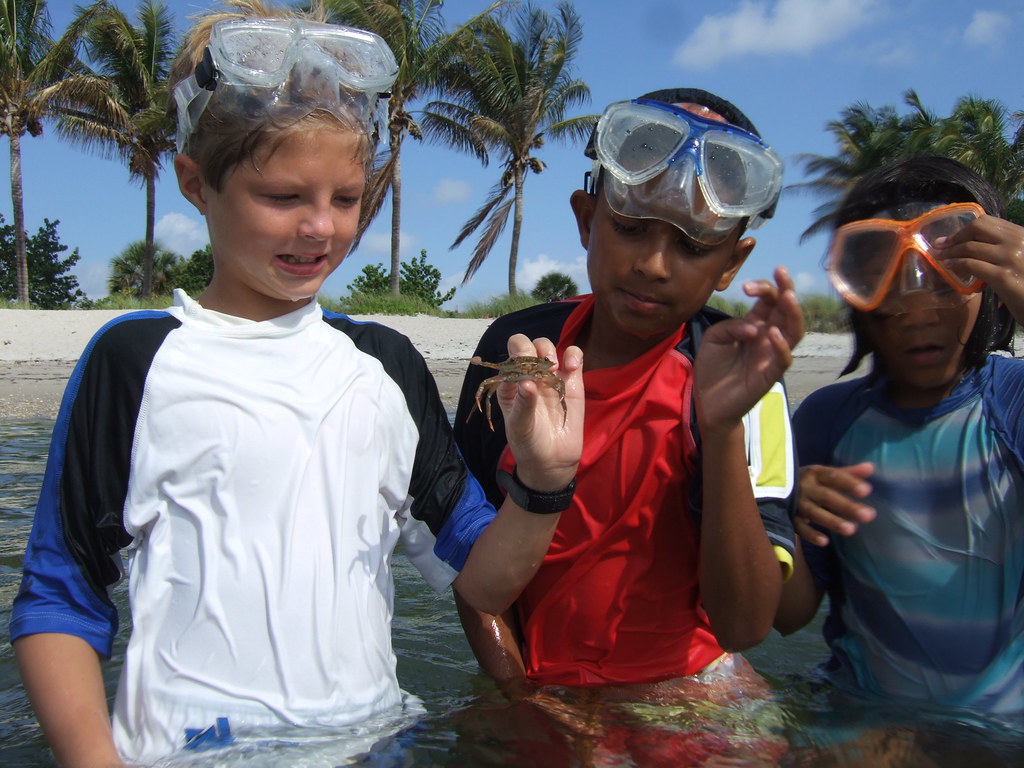 Of course I explained to them the proper and safe way to hold crabs without getting pinched, and they learned that right quick! I decided to show them my very own favorite way to catch crabs without using a net and they followed me until I found a nice one that would cooperate. I gave chase and quickly had it cornered. As they all watched, it began to wave its claws back and forth in a menacing fashion. I knew it was now ready for my tried and true technique! One that works almost every time!!! I took my finger and wriggled it right in front of the crabs nose and sure enough it fell for the bait!!! In one split second I had him right where I wanted him, and I knew there was no getting away now!!! It was latched on like there was no tomorrow and I proudly held it up for everyone to see! For some reason or other no-one else wanted to give it a try??? Maybe next week… 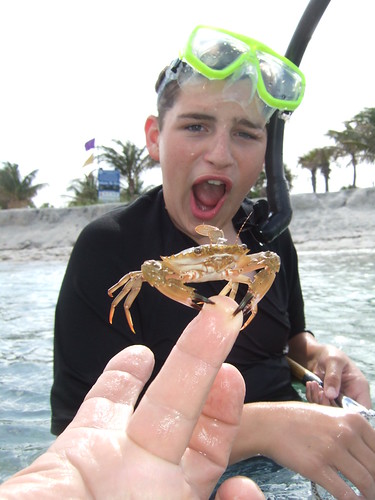 I can’t tell you how much FUN they thought that was!!! It was just GREAT!!! You could have heard then laughing a mile away!!! I loved every second of it!!! Well almost anyway… It just doesn’t get any better than that!!! Just how much FUN can one have? you’ll have to join us and find out for yourself! See you soon!!!