Two new adventurers recovered from their colds and joined the crew today, Ariana and Liana. 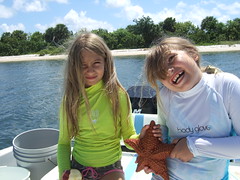 A highlight of the day was searching for sharks teeth on “Fossil Beach” and collecting knicker beans on our island romp. Everyone found at least one! They are in the bags in the photo below. 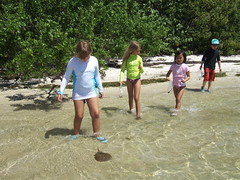 We also scooped and inspected sea weed for sargassum frog fish. We weren’t lucky enough to find one but we did discover juvenile pilot fish, soldier fish, bar jacks, pipe fish, sargassum file fish, scrawled file fish, and numerous species of crabs and shrimp camouflaged like the seaweed itself.

Finally, we revisited the rock garden where we swam with large schools of parrot fish and saw a few arrow crabs.

Tomorrow we’ll have one more adventurer on the crew, an aspiring photographer, Drew. Beacause of that we’ll be starting the day at the rock garden to take some photos. Then we’ll take it from there to finish off another great week.

One thought on “Exploring Fossil Beach”